I finally cracked open the DVD I received last week from the Brad Shuster, one of my instructors at the MBL fellowship, to take a look at the images and videos that our group made during our stint in the lab.  The first set includes tunicate larvae– the same guys that I talked about last week.  Brad helped us color these with various antibody stains, which essentially tag specific tissue types with fluorescent dyes so that they glow under the microscope.  The second set of images are antibody-stained sea urchin embryos at various stages of development (I talked about making those embryos here).  And the last set shows timelapse movies of those same types of cells dividing.  All images were taken by the 2011 Logan Science Journalism Fellows (Biomedical section) at the Marine Biological Laboratory in Woods Hole, MA using Zeiss equipment.

Tunicate larvae (the black dots = eyes, and the long thin section = tails). Click on images to make them bigger: 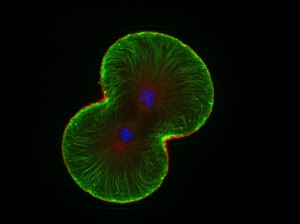 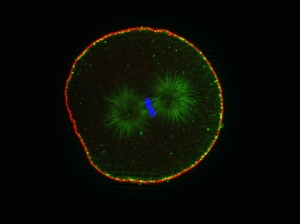 This next one is of a sea urchin in the gastrula stage– you can see its gut forming in the center (in pink): 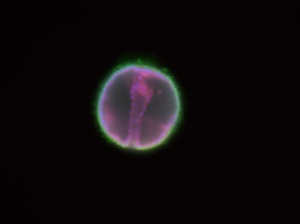 And here is the sea urchin in its prism stage.  Its gut is in pink, the top of its body is to the right and its butt to the left: 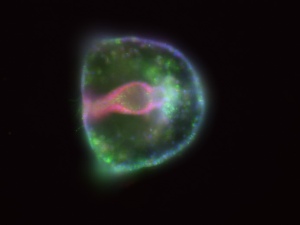 Now for a few quick movies.  This one shows a sea urchin cell during fertilization.  You can see the sea urchin sperm hit the bottom of the central egg. Shortly after, the egg forms an envelope around it to ward off other sperm:

Here is the first cell division (same thing that is happening in those mitosis photos above).  Note that the cells divide in synchrony:

Here, the cells go from four to eight:

And here, the cells go through their fifth division.  In this stage, a group of four smaller cells appear on the bottom of the embryo.  These are eventually responsible for the formation of reproductive cells (if you chop these off, the sea urchin grows up sans gonads):