This week, I’m in Kyoto, Japan to attend the 2011 Kyoto Prize festivities and lectures, as well as to interview two of the laureates. The above photo is from last night’s presentation ceremony, which took place in the Kyoto International Conference Center, a cavernous hall that looks like an AT-AT walker bunker iced in flowers and traditional Japanese art (quite surreal, really).

The Kyoto Prize is an international award with three main categories: Advanced Technology, Basic Science and Arts/Philosophy. The categories are further broken up into four sub-groups, each of which are awarded every four years on a rotating basis. This year, the Advanced Technology prize is in materials science/engineering, Basic Science is in Earth and planetary sciences/astronomy/astrophysics and Arts and Philosophy is in theater/cinema.

Kazuo Inamori, founder of ceramics and electronics giant Kyocera, started the prize in 1985, he says, often, “based on my lifelong belief that a human being has no higher calling than to strive for the greater good of humanity and the world” (I’ve heard the line in each of the three speeches I’ve seen him give so far, and I’m told the script has hardly changed since 1985).  Not a surprising inspiration, considering that Inamori moonlights as a Buddhist priest, and that Kyocera’s corporate motto is “Respect the Divine and Love People.”

The prize’s selection process is brutal. Because the categories change each year, Inamori’s non-profit, the Inamori Foundation, must select new selection committees each time.  Once selected, the selection committee for each category nominates hundreds of potential candidates, who are then reviewed by a separate Kyoto Prize committee, once again for each category.  Then, the Kyoto Prize Executive Committee reviews them all.  The process takes three years. Dizzy yet?

This year, the laureates that made it through that series of selection hoops are: John Cahn, who discovered a way to make alloy metals like those in your iPad and most other gadgets stronger and better (Advanced Technology), Rashid Sunyaev, whose cosmological theories help astronomers measure the universe (Basic Science) and Tamasaburo Bando, one of the world’s premier Kabuki actors, famous for playing the female role (Arts/Philosophy).

Tomorrow morning, I’ll speak with Drs. Cahn and Sunyaev, and hope to publish those interviews soon.  Until then, I leave you with some more photos.  All, including the photo above, are copyright of the Inamori Foundation.

The laureates, from left to right: Cahn, Sunyaev and Tamasaburo. They are pictured with their Kyoto Prizes (not pictured: the 50 million yen each received, which works out to about $645,000) 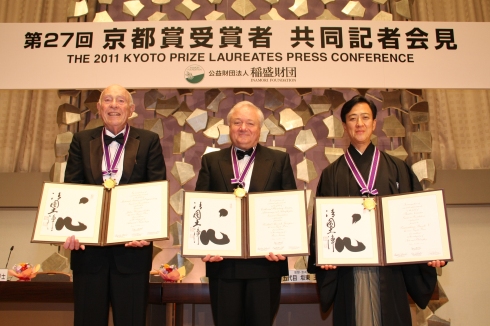 A traditional Noh performance at the ceremony: 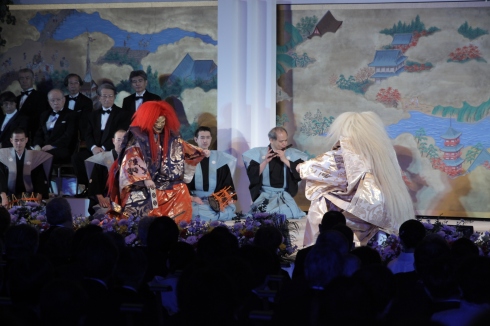 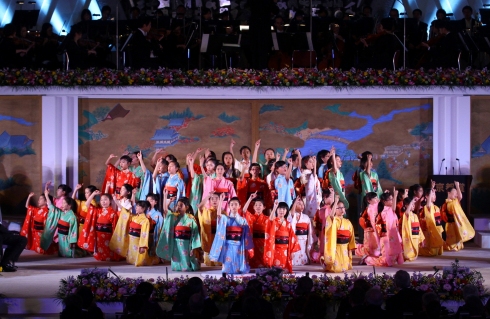